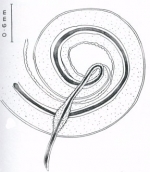 In general appearance and most of the body characters T. ovis closely resembles T. globulosa.

Baylis (1939) differentiated T. ovis and T. globulosa on the basis of the size of the spines on the distal expansion of the everted spicule sheath (those on the distal expansion of the sheath being larger than the rest in T . globulosa and vice versa in T. and by the topography of vagina (long and slender with its lumen widening gradually in T. ovis, whereas short and stout with its lumen forming angular bends and opening suddenly into an egg chamber in T. globulosa). However, no size difference was observed in the spines of the spicule sheath in the male specimens of T. ovis examined herein. The males of the two species could be differentiated with reference to the shape of the proximal end of the spicules and also of the distal expansion of the everted spicule sheath. Further, no cuticular inflation was noticed near the head end as recorded  by Gupta and Mathur (1968).

Gupta, N. K. and Mathur, S. (1968). On the incidence, morphology and taxanomy of some nematodes of sheep and goats from Chandigarh and Madras. Research Bulletin (N.S.) of the Panjab University. 19: pp 291-305